‟ Vienna is different" – that’s what you can read on large billboards when you are approaching the city on the highway. And it’s true: Diversity and variety are the most important keywords to describe life in Austria’s capital. ”

LE SHOP [Kirchengasse 40, 1070 Wien, Austria] is two awesome things in one: a graphic studio and a gift shop. At Mein Design (Kettenbrückengasse 6, 1040 Wien) you can buy limited editions by local designers. Upcycled furniture and accessories are offered at Vielfalt [Messerschmidtgasse 29, 1180 Wien, Austria].

Komolka [Mariahilfer Straße 58, 1070 Wien, Austria] is the largest fabric retailer in Europe. Knitters will love Laniato - Das Wiener Wollcafé [Beatrixgasse 4, 1030 Wien, Austria]. They have a wide range of goods and as the name implies it is not only a shop but also a café. Downtown you will find many little stores offering beads and all kinds of supplies for jewellery making. 4xBo [Innere Stadt, 1010] is one of them. A shop where you will find anything and everything for crafting is Apropos Basteln [Hütteldorfer Straße 122].

There are two markets that take place on a regular basis: Edelstoff Designmarkt and Fesch’Markt.

If you have never been to Vienna before, the traditional coffee-houses are a must. My favourite one is the Café Landtmann [Universitätsring 4, 1010 Wien, Austria], which was founded in 1872. Sigmund Freud used to have coffee there – do I have to say more?

You like to try something unusual? Visit Cafe Neko [Blumenstockgasse 5, 1010 Wien, Austria]. This café is following the example set by the successful Japanese cafés where you can play and cuddle with cats. You are more into computers than into cats? Last year four college students opened Vienna’s first tablet computer restaurant, called Viereck [Johannesgasse 16, 1010 Wien, Austria].

The Badeschiff [Donaukanallände, 1010 Wien, Austria] is a pool, a restaurant and a dance club – all three on a boat on the Donaukanal. Many events are held around the Donaukanal [Donaukanal, Wien, Austria] in summer where Vienna’s "beaches" are located. As an online editor for vienna.at among other things I cover the topic cycling. I test bike paths and can only recommend discovering the city by bike; it is a totally different perspective: Try the “Ring-Rund-Radweg“ at night! Tourists can borrow “Citybikes“ for free, there are more than one hundred Citybike-stations in town.

The Volksgarten [Volksgarten, 1010 Wien, Austria] is one of the most beautiful parks in Vienna and a great place to sit and craft. You won’t find another park in town that has as many types of roses, a lot of them are rare strains. Plus there is also a Greek temple in this park.

To get a glimpse of Vienna’s often cited morbid atmosphere visit one of the cemeteries. It doesn’t have to be the Zentralfriedhof Central Cemetery [Simmeringer Hauptstraße 234, 1110 Wien, Austria] which is despite its name not very centrally located. On a rainy day you could also pay the Funeral Museum a visit. Speaking of unusual museums: Vienna has many of them. There is a Museum of Art Fakes / Fälschermuseum [Weißgerber, 1030 Wien, Austria], a Museum of the History of Contraception / Museum für Verhütung und Schwangerschaftsabbruch [Mariahilfer Gürtel 37, 1150 Wien, Austria] and a Radiator Museum to name just a few. 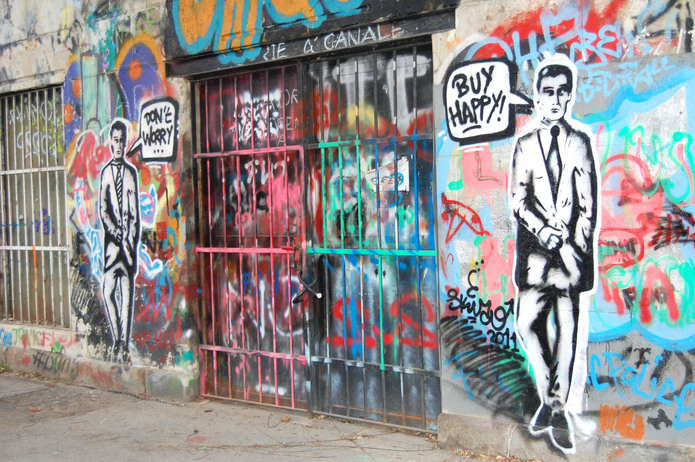 Almost every tourist buys a Sacher-Torte. If you decide to do so, make sure you buy the original at the Café Sacher [Kärntner Straße 38, 1010 Wien, Austria] and not one of the many imitations. Need a culinary souvenir but smaller? Buy Staud’s jam – it is sold in almost every supermarket. StoBa [Hintzerstraße 6, 1030 Wien, Austria] is a manufacture where they produce soap using a traditional Viennese recipe. Soaps are hand-made and contain only natural ingredients. Anything but cheesy are the souvenirs-shirts by Motmot Design [Kirchengasse 36/8, 1070 Wien, Austria]. In their small shop they offer “t-shirts on demand“, but also posters, buttons, stickers, postcards, and ceramics. A great variety of handmade goods is also offered at Die SELLERIE [Burggasse 21, 1070 Wien, Austria].

The MuseumsQuartier [Museumsplatz 1, 1070 Wien, Austria] is one of the most inspirational places: There are many different museums, small shops, nice restaurants and a big courtyard. It is one of the main meeting points of Vienna’s creative crowd. It is also a great place when travelling in a group: You can easily split up and everyone will find something that he or she might be interested in. By the way: Originally this complex was built as the royal stables. 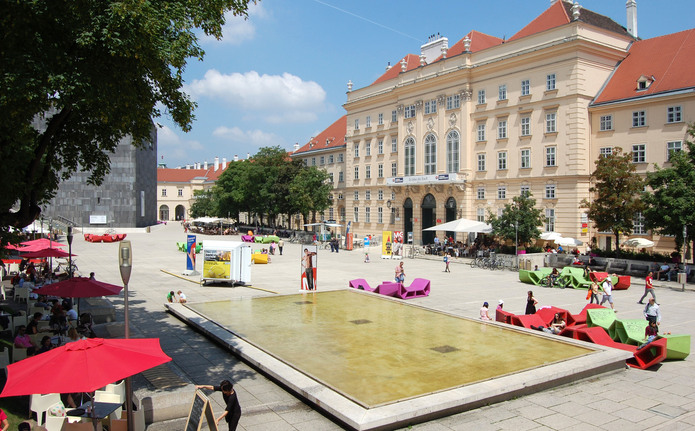 A lot of tourists take pictures with the statues of their favorite composers – Mozart, Schubert, Beethoven – you name them, we’ve got them. There are five Beethoven statues in Vienna – just sayin‘. But there are also statues of historical figures like Sigmund Freud (University [Am Kahlenberg 1, 1190 Wien, Austria]’s inner courtyard) or Che Guevara (Donau Park [Donauturmstraße, 1220 Wien, Austria]). 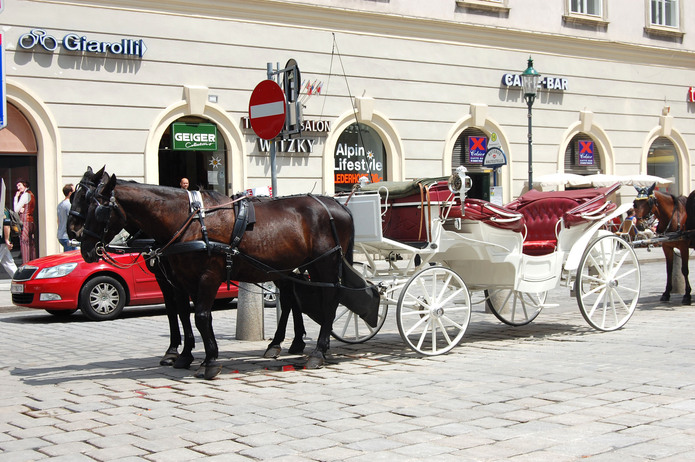 If you want to make sure that everybody recognises at first glance that your picture was taken in Vienna, place yourself in front of one of the following sights: The Prater [1020]-Ferris wheel, the St. Stephen's Cathedral [Stephansplatz 3, 1010 Wien, Austria], the city hall or the Hundertwasser House [Kegelgasse 36-38, 1030 Wien, Austria]. Also typical for Vienna: the old red tramways and the carriages (called "Fiaker" - probably the most popular photo motif).