‟ The best thing about living in Portland is the quirky culture. People are friendly and helpful and appreciate good design and great food. Plus, it's a well-kept secret that the summers here are fantastic, and the rainy winters really aren't that bad. ” 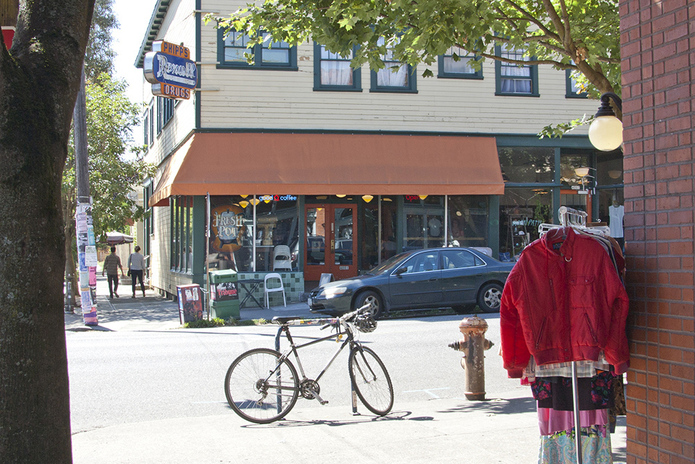 The Crafty Wonderland [808 Southwest 10th Avenue]shop and the Portland Flea are the first places that come to mind for crafters to sell their crafts, though tons of local shops (and even some national chains) sell locally-made items alongside their other offerings. Portland has a long tradition of supporting local makers with the Portland Saturday Market [2 Southwest Naito Parkway] (both days of the weekend, despite the name), though it skews to the older generation. There are also seasonal fairs (like Crafty Wonderland) that spring up for holiday gifts, and during the summer the streets are crowded with vendors hawking handmade items at Last Thursday on Alberta.

I'm not really sure--I do most of my crafting at home. But this town is so DIY-friendly that crafting would be welcome at most any park or cafe, and it would probably be a great conversation-starter.

The only one I'm aware of is the Rose City Yarn Crawl (http://www.rosecityyarncrawl.com/), which has a pretty epic reputation.

Practically anywhere in the city is great for making friends! You can't throw your knitting needles without hitting somebody crafty around here. Taking classes in a medium you'd like to learn would be a great way to meet other crafters, though. Many of the fabric stores around town have sewing classes, Collage [1639 Northeast Alberta Street] has classes in a lot of different techniques, and Dava Bead and Trade [2121 Northeast Broadway Street] has metalworking classes that I've taken.

Portland has its own incredibly popular urban goat herd. They even have their own blog (http://thebelmontgoats.org/), and they keep multiplying, having adorable little kids two at a time. Visiting them is really fun, since most of them are pretty friendly, and if a caretaker is around, you can even go into their pen. They currently live on an empty lot in SE Portland, but sometime soon they'll be moving to a new location that will still be publicly accessible. There's this weekly tradition here called "Zoobombing," where people ride tiny bikes down a steep hill near the zoo and into the city, screaming on the way down. Between rides, their tiny bikes are kept locked up on a tower downtown as an art piece. There are a lot of more traditional sculpture pieces and fountains around town that are fun, too. There's a cool retro-futuristic aerial tram that you can ride from the waterfront to the top of the hill where Oregon Health & Science University [3181 Southwest Sam Jackson Park Road] is located, though I still haven't ridden it! If you're a fan of the show The Simpsons, you can keep your eyes peeled for streets that Matt Groening named characters after--just google "Simpsons map of Portland" for ideas. 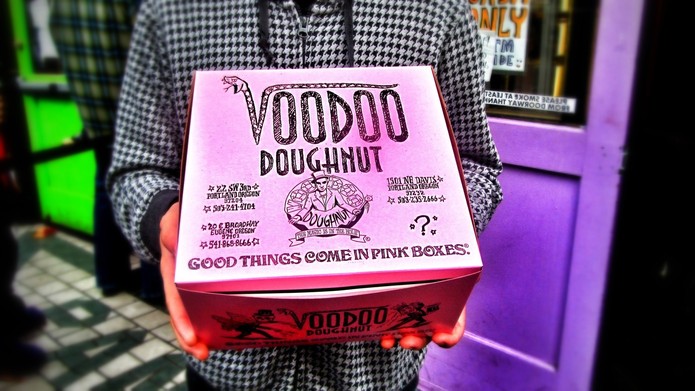 Voodoo Doughnut [22 Southwest 3rd Avenue]s are a pretty popular souvenir, as are local beers or spirits. For a more long-lived memento, support the designers here and bring home some Portland-made art, clothing, housewares, or accessories.

For inspiration I recommend going to The Portland Art Museum [1219 Southwest Park Avenue] which is fairly small, but has interesting events and art. Oregon Museum of Science & Industry [1945 Southeast Water Avenue] (OMSI) is fun, especially if you like science or have kids. For some gorgeous architecture, drive through the West Hills Village [5711 Southwest Multnomah Boulevard] and look at the houses perched precariously on the hillside. Long city walks through cute neighborhoods (the Laurelhurst [Laurelhurst], Overlook [Overlook], and Ladd's Addition [Ladd's Addition]) are a fun way to discover new inspiration. The downtown Multnomah County Central Library [801 Southwest 10th Avenue] is lovely, and has inspired at least one song (by the Decemberists). 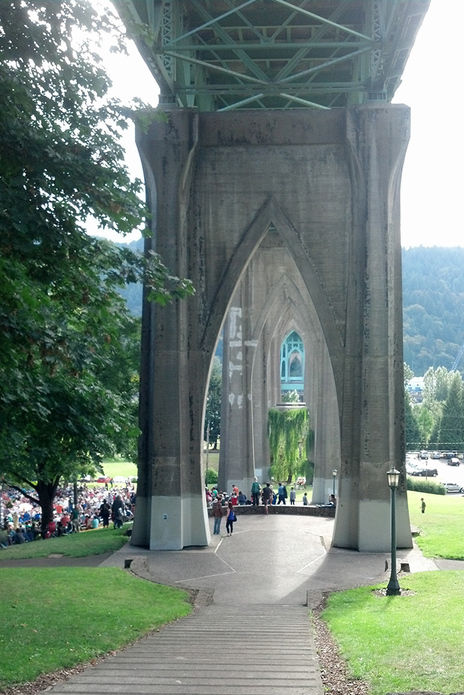 Taking a stroll downtown, or down one of the big retail streets (Hawthorne, NW 23rd, Mississippi, or Alberta) is always great for shopping and people-watching. And if you leave Portland without visiting Powell's Books [Powell's Books], you've made a terrible mistake. There are some fantastic parks within city limits. Some of my favorites are Cathedral Park [Cathedral Park], Peninsula City Park [700 North Rosa Parks Way], Forest Park [Forest Park], Mount Tabor City Park [Southeast Salmon Street], and Laurelhurst Park [3756 Southeast Oak Street]. The Portland Japanese Garden [611 Southwest Kingston Avenue], Portland Rose Gardens [400 Southwest Kingston Avenue], and the Lan Su Chinese Garden [239 Northwest Everett Street] are all super photogenic and wonderful to visit. You can also drive to the Oregon coast in less than two hours and see tidepools or foggy vistas, or visit the Columbia River Gorge and look at the many spectacular waterfalls. Multnomah Falls is a must-visit if you've never been, but Oneonta Gorge and Beacon Rock are a couple of spots I've visited recently that are great.

The bridges (any of 'em!) are pretty photogenic, but the most iconic Portland things to take photos of are probably the Made in Oregon sign [] and views of Mt Hood [Mt Hood, Oregon City, OR 97045, USA]. It's only visible on clear days, and on extra-clear days, you can see Mt. St. Helens.